Example:
Ethane is an alkane, the stem “eth” tell us that it has 2 carbon in the molecule, and the suffix “ane” indicates that it is a member of the alkanes homologous series. 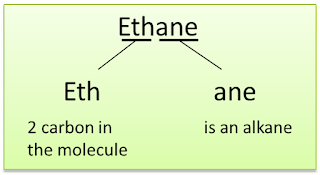 The table below shows the naming code for the stem. In SPM, You will need to remember the codes for the number of carbon atoms in a chain up to 6 carbons.

Name of the First 8 Alkanes

The table below shows the molecular formula and name of the first 8 members of alkanes.